A Human Cell Map of Latin American Diversity
We will be leading this collaborative project among other 10 Latin American Institutions, this network aims to build a Latin American cell map of immune blood cells and gallbladder tissue cell types from diverse Indigenous and mixed populations from six countries across the Americas (Mexico, Colombia, Peru, Chile, Brazil, and U.S. Latinos).

To the ends of the Earth
The Economist

‘No one could have predicted.’ DNA offers surprises on how Polynesia was settled
Science Magazine

Native Americans Crossed the Pacific Long Before Europeans
The Scientist

Indigenous Americans had contact with Polynesians 800 years ago, DNA reveals
The Guardian

A conference on Twitter? Wait, what? Yes, social media is here and science needs to adapt for it. The Biotweeps Twitter Conference is a global event bringing together researchers from across the biological sciences to share and discuss their research with a social media audience. This year we decided to participate for the first time and we really enjoyed it!

Can you imagine presenting your research work in only 4 tweets (280 characters x tweet)! For sure this was a challenge and a good exercise for us to address only essential information, but at the same time, trying to do catchy media content for a global audience.

Through posts, infographics, and videos we decided to present one of our most ambitious projects “The Mexican Biobank Project #MXB”, an international collaboration with diverse research and government institutions; which is creating the largest genomic biobank in Latinamerica to better understand how certain genetic markers correlate with infectious diseases and cardiometabolic traits. This information will help to create health strategies to tackle these diseases for a diverse population like Mexico.

Now more than ever it is necessary for scientists to share back their results and findings to the people, otherwise, all the knowledge will be restricted for only a few.

Juan Esteban Rodríguez and part of his work on Asian ancestry in Mexico got featured on Science News. You can read the full article in Spanish or English. Find the podcast here.

How does the new Trump administration affect science? In this article, Lizzie Wade explores how the new policies of President Trump will not only have a negative impact on his country but also to their neighbor country.

See Andrés share details about his life and career in this intimate interview with Javier Solórzano for Once Noticias. Click here. Warning! Unfortunately you need to know Spanish to hear about the times Andrés played volleyball in the golden beaches of Barcelona.

You are invited to apply to work on the Mexican Biobank Project, which aims to build one of the largest genetics biobanks in Latin America and to build capacity in big data science in medical genomics in admixed populations. The project is funded through CONACYT and the Research Councils UK (RCUK) and integrates teams in Mexico (LANGEBIO), the UK (Oxford) and the US (Stanford). The project will generate genetic data on 10,000 Mexican individuals with linked demographics and medical data, and measure antibody titers on a panel of approximately 20 pathogens that are naturally circulating in the Mexican population. This resource will provide research opportunities in population genetics and genetics of complex traits in an admixed population, and the opportunity to study the genetic determinants of seroreactivity to many common pathogens in Mexico. Click on the title for more information.

It's our pleasure to announce the new Ancestry Service available at LANGEBIO's Genomic Services. We have at our disposition a genotyping platform of more than 1.7 million markers (SNPs) and a curated reference panel that allows us to estimate the contributions of different human populations in an individual's genome. Additionally, we can also report haplogroups derived from the mitochondrial and Y chromosome genomes. The service is now open to everyone, click on the title for more information!

Andrés Moreno will be imparting a course titled The Genetic Footprint of Latin America and its Impact in a Multicultural Society. Find more information here. 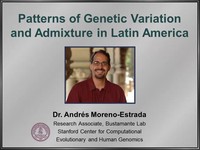 
Check out the upcoming SMBE meeting on admixed populations in San Antonio, TX!
Society for Molecular Biology and Evolution